My Dad excitedly exclaimed, "The king of rock 'n' roll is on Anguilla!" Who did he mean?

Extraordinary guitarists, all. They epitomize rock 'n' roll (uh, from my Dad's era).

But the king of them all, to my Dad, is Keith Richards!

Most people go totally bananas over celebrities, even if they don't particularly care for them. My Dad however, has never been phased by the rich and famous. 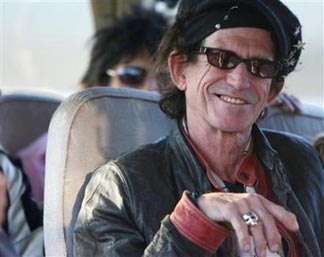 I tell you that as a lead-in to one fine day in March 2006 when my Dad learned of a tasty piece of news. My sister and he were having a delicious breakfast chez Deon at his restaurant, The Overlook, when Deon told my Dad the great news.

Deon had come to be good acquaintances with "Keif," as he is known to his friends. It turns out that he frequently has breakfast there. So Deon confirmed what my Dad had heard as a rumor... "Yes, Keith Richards is on the island!"

My Dad's eyes widened in excitement.

I know that look. And once my Dad sets out to get something, he is relentless. His new mission was...

My Dad and sister had breakfast at Deon's almost every morning (this was during the week that I was still in school). But no luck.

My Dad began asking people about Keith's whereabouts, sharing what he knew about them, and just talk, talk, talking with excitement to everyone he met!

This constant chatter created a certain buzz on the island, and soon enough...

Amazing! My Dad had a date, time and location where Keith would be.

The lovely cleaning lady at our Anguilla condo, told us that Keith plays Sundays at Uncle Ernie's on Shoal Bay East.

"Too cool, imagine sitting feet away from Keith with a Carib and burger."

Naturally, he could not keep this juicy tidbit of information all to himself. So, he told a few (hundred?) people, including the condo owners and Henri at Le Bon Pain. Of course Henri told Didier et Veronique from Le Bar. Veronique is a huge fan and they told their friends.

All these people told others, and soon enough, half of the island was waiting for that coming Sunday.

All this time, my Mom and I were still back in Montreal. My sister had a two week spring break, so she and my Dad had left one week earlier. We were due to come into Anguilla that very same Sunday that Keith was playing at Uncle Ernie's.

That Saturday evening, my Dad called. "Uhhhhhh.... Do I have to pick you up?"

"But Keith Richards is playing at Ernie's."

My Mom laughed, sure this was another of Dad's jokes. But no, Keith was indeed playing the very same time that our ferry would dock in Anguilla.

My Mom and I rolled our eyes, but we understood.

The next day dawned, and my Dad was ready. Camera in hand, key in the ignition, three hours before the appointed hour... it was Keith-time!

He pulled into Shoal Bay Beach way early, and strolled on over to Uncle Ernie's. Things were looking good. Amps and keyboards and guitars were being plugged in and set up.

"What time is Keith playing?" my Dad asked.

The best table was open. They'd be immediately in front of Keith.

Didier et Veronique from Le Bar showed up next.

The couple who managed the condos were there.

A crowd gathered. What a buzz as the time grew close.

A man took the stage and started tuning and noodling. It was obviously almost "that" time.

Then that man sat down, and started getting comfy, as if he was about to start playing. Warm up act?

My Dad was confused. This man looked nothing like the Keith Richards he knew... 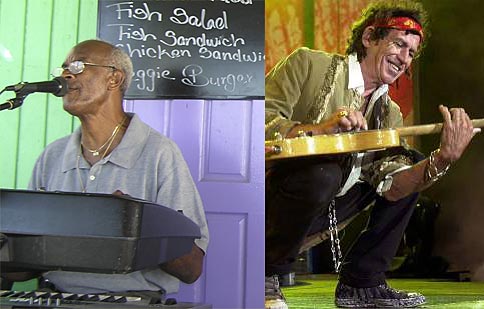 My Dad was in a state of bewilderment. He leaned over and asked the man, "Where's Keith?"

The man gave him a quizzical look, "Keith? I'm Keith!"

My Dad replied, "No. no. Keith Richards!"

"You know, the Rolling Stones?"

My Dad nodded waiting for what he was going to say next. 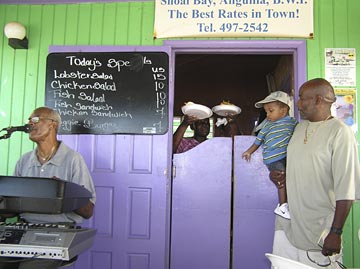 I would have loved to be there to see my Dad's face. He says it felt like his world froze, imploded.

My Dad smiled politely, kicking himself inside. He says, though, that Keith Gumms was quite good. Just don't ask him to play "Gimme Shelter." Ha! Ha!

But I wish it could have been my foot kicking him! My Mom and I had docked in Anguilla,, We took a taxi to the condo. And we were waiting and baking, and waiting and baking in the grueling hot sun, still in our "Montreal-winter-wear."

Naturally, dear old Dad, hadn't left us the key to the air-conditioned unit. And the good people who owned and ran the condo units, where were they?

By now, you know that they were chasing after my Dad's rumor, too. They were the only other ones with a key.

And that's the story of how my Dad almost met Keith Richards on Anguilla and started an island-wide mania in the process!