I couldn't wait for my next trip to Anguilla after having been on my first real dive. Besides the incredible beaches, sugary sands, and warm hospitality... I wanted to DIVE again. This trip had me visiting in the Spring... Moonsplash & Festival Del Mar time!

I very much wanted to get my second dive under way as soon as possible!

Dougie was available and I was on the next trip out for another Anguilla dive.

Heading toward the Oosterdiep wreck on Desha 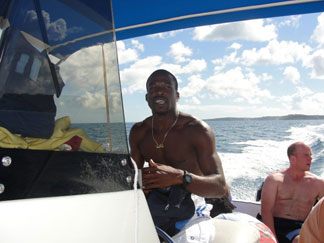 I had familiarized myself with some of the various dive sites in Anguilla since my first dive.

I was so anxious to hear where we were going. Mostly because the main thing I wanted to see underwater was a TURTLE! If I saw nothing else but a turtle, I would be so happy!

Some of the dive sites are known for certain sea life. I was hoping for a site that was one where turtles were often spotted.

We left Sandy Ground on Desha and arrived off-shore just out from where Viceroy Anguilla is now.

Dougie explained that on this dive we would go down on a natural reef and then swim along the sandy bottom over to the wreck of the Oosterdiep.

I was excited to hear this because I had heard from friends that they had seen turtles on the Oosterdiep!

The Oosterdiep is another ship that was sunk deliberately back in 1990. It is just over 150 feet long and sits upright in about 80 feet of water.

Once again, Dougie was my dive buddy since I was a solo diver.

And once again, Dougie made my dive even better by making me feel so comfortable.

His sight continued to impress me during this dive. I was 100% blown away by the things that he sees and points out.

Garden Eels near the Oosterdiep Wreck 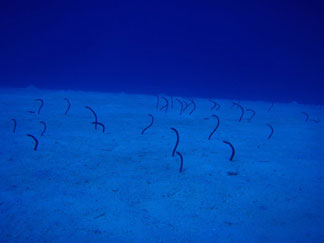 Of course, the reef was full of pretty coral and sea fans. The fish were beautiful, but then, we start to make our way across the sandy bottom...

Here is where I get my first welcomed surprise!

I had heard about garden eels and saw pictures of them in my "fish book". As Dougie and I lead the way across the sandy bottom, he points ahead and I see garden eels.

If you are unfamiliar, these are tiny eels that rise out of the sand. They are easy to see since their presence isn't masked by anything else - their darkish bodies framed by the light colored sand.

Why was I excited to see these garden eels?

Because they aren't so easy to see once they disappear back in to the sand as fast as lightning when something approaches! How cool. Almost in the same fashion as a prairie dog.

Dougie and I got a good look at them before we were close enough to cause their rapid exit back to safety!

Just after we passed them, Dougie points ahead toward the 11 o'clock position. He kept pointing until he could tell I saw what he was pointing at. 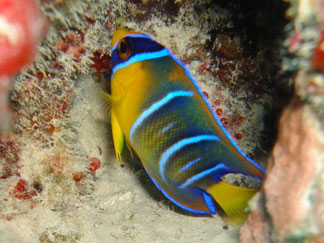 I love that moment of anticipation... what IS this going to be, I thought!

It was a humongous stingray buried in the sand. And it was close!

This stingray went down in the books as the biggest one I had seen.

As I was busy being distracted by the garden eel and stingray excitement, I had not noticed that something else was coming in to sight as we had continued to move forward.

I looked ahead and there sitting there on the still ocean bottom is the shadowy outline of the Ooesterdiep. It looked really big and creepy cool.

It was also such a different way to approach the wreck than descending down on it, as I had in my first dive on the Commerce.

As we got closer I could see many schools of fish hanging out along the edges of the wreck.

These next few moments I remember very distinctly...

Dougie was to my right and the wreck was on my left. He gets my attention and points up to the right.

This is the turtle I saw that day on the Oosterdiep 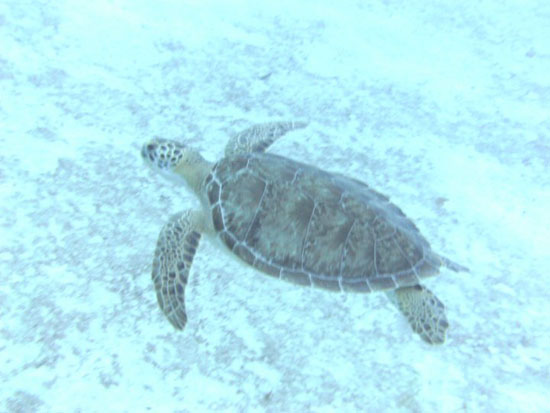 Way up above us where the sun is making the water glow, I see the silhouette of a turtle!

I was so happy I think I started to tear up. I watched it gracefully move high above us and away.

My smile was as big as a smile can be with a regulator still in your mouth.

We continued on around the far side of the wreck. My dive felt complete already but I still enjoyed seeing all of the snapper and grunts that covered the wreck.

Dougie showed me some places within the wreck to look in to for extra large lobster. I must admit, when I see beautiful fish, I don't think about eating them. But when I see these enormous lobsters, I think about how many people that lobster would make happy... grilled and with a drawn butter.

When we were nearing the end of the dive, I moved toward the mooring line which is at a little higher depth near what I would call the crow's nest of the ship.

I noticed several of the other divers remaining still and all facing one direction. The lady who had brought her camera with her was taking pictures.

It took me a second to find what they were looking at.

Then, I could not believe my eyes. Here I was already completely satisfied with my dive and what do I see but a big, ole sleeping turtle. 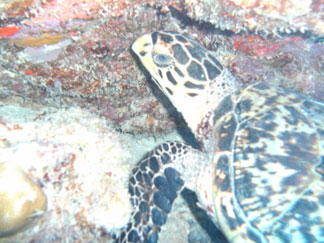 He was napping right there in the crow's nest. Peaceful as can be and resting his head on his arm!! As big as he was, the way he was sleeping reminded me of a baby.

This was too much!

I really felt like I was dreaming then. It was such a special sight to see.

He eventually woke up and when he did, he slowly started moving only his eyes to look around.

I gather that he didn't like the idea of being stared at by about four divers and he, in true turtle style, very slowly started to move away and beautifully as can be.

I loved that he did it in a polite way - more like a "I don't really care for you staring at me" way vs. a "I need to get myself out of here right now!" way.

He gracefully moved on and the respectful divers all appreciated such an opportunity.

I smiled for the next 3 days at least. 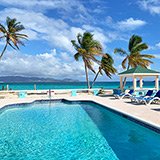 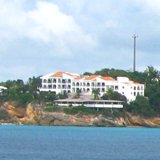 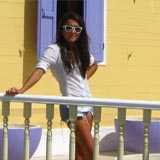