Sailing cruises from island to island.

Whelking in Anguilla? Yes, if you vacation with my Dad.

Certainly, there are times when he takes it too far...

But it keeps you guessing! What's next? Iguana Caves? Cliff-Side Hikes?

So was I surprised when he woke me up, one fine morning, wearing reef shoes?

Never... But my eyes did widen when he said we were going, whelking!

Still in a dreamy state, I could not understand what a day of "whelking" could possibly entail, mostly because I did not know what a whelk is.

My sister and I were about to find out...

Sleep crumbs still in our eyes, we stumbled out of bed. "Hurry," he urged, "before someone else gets the whelks." We joined my Dad and our friends from Anguilla, Karen and Netta (my Dad calls her "Internetta").

They were leading us on our journey!

Karen and Netta showed us the way down a dirt path, through the brush and to the sea. We were about to "whelk!" On the way, we learned that a whelk is a sea snail. A delicacy, it seems. Yum! (I think.)

First things first, cover your feet well! As you see, we are walking over sharp, jagged, dried out coral, not soft sandy beaches... 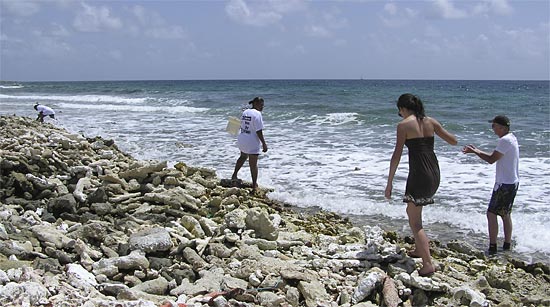 As for stepping in the sea itself? 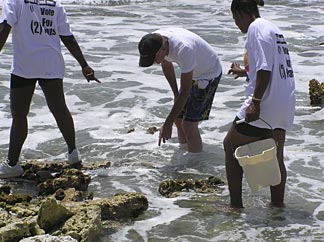 Beware of the sea urchins!

A foot full of quills?

That explains the reef shoes.

But, wait. The "dangers" of whelking are not over.

I hope you have good balance...

These wet rocks are more slippery than black ice in Montreal's winter months!

My Dad lost his balance a few times, although Karen and Netta were quite sure-footed. 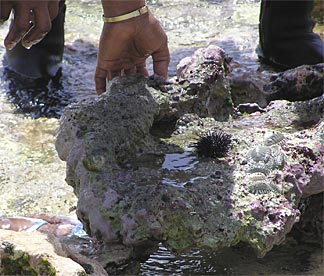 Once you've mastered walking along this tricky shoreline, it's a simple matter of finding these snails!

One by one, flip over those rocks in the sea. Moments of anticipation...

Any snails sucking on?

Watch out! If your hands are in the wrong place at the wrong time, you'll get a fist full of sea urchin.

Karen and Netta got stung a few times.

On the bright side, you just may see a baby octopus sleeping inside a crevice in one of these boulders, like we did!

And you should, eventually, after spotting all that sealife, find at least one snail. 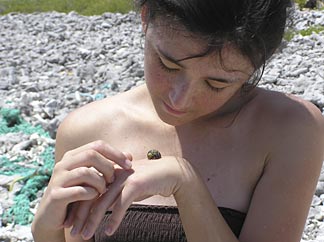 After being knocked over by the waves and growing ever more wary of those quilled little beasts, my sister thought she'd leave the whelking to my Dad. So she stayed safe ashore with her new best friend. 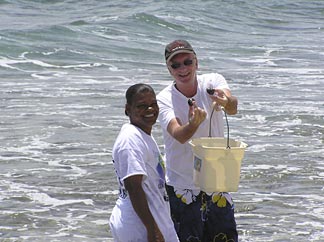 Meanwhile, my Dad was obsessed.

Whelking definitely isn't his forté, but he certainly tried.

He only uncovered a few of the 100 or so collected that day, but each one was announced with a victorious "I found one!"

And I'm sure he'll bring "reef gloves" next time (if such things exist). He turned over each rock agonizingly slowly, worried about the sea urchins.

Karen and Netta, on the other hand, were pros!

And they seemed to know where all those tasty whelks hid! 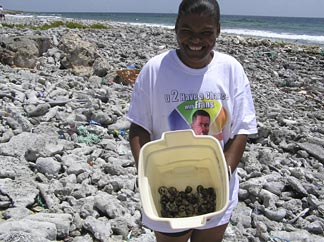 It took a couple of hours, but they half-filled the bucket. Mmmmmmmm.

Put away the reef shoes and head over to a family friend's BBQ.

What a great day. Yes, add "Anguilla whelking" to your list of atypical things to do during Caribbean island vacations.